August 8, 2018
In July I released ‘The Undercover EP’, an EP of my covers of some of my favourite songs. I wanted to explain a bit about which tracks are on there, and why. Choosing songs to cover is a tricky task. You have to love the songs, but it isn’t the same process as picking your desert island discs. The criteria aren’t the same.  The songs have got to feel good on you, sound good in your voice, be something you can sing with feeling and authenticity. But, crucially, you’ve also got to feel that you can bring something new to them, or bring something out of them that maybe people haven’t noticed before. It’s a collaboration with the original artist and their work, a melding of their story and yours. It’s like shining your light onto a box of jewels; your light, being distinct to you, might hit the jewels at a different angle, making some small detail of a sapphire sparkle brighter. Despite it always having been there, someone looking might think, oh, I hadn’t noticed how blue that was before. 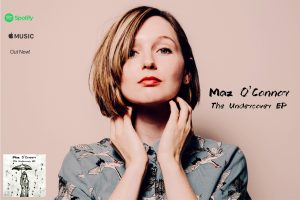 Oh, and for those of you that have been asking, I am working on new stuff of my own. It’s pretty much all I’ve been doing. If you’ve come to a show recently, you’ll have heard some of my new songs. Hopefully, there will be an album of new material ready for you in 2019. This was a project to give you, and me, some music in the meantime.
Anyways, I went through a few different options for the EP, and honestly tied myself in a few knots along the way, but theses are the tracks I settled on, and why:
Jolene by Dolly Parton
I remember my mum talking to me about this song when I was little. She said that it isn’t up to women to stop men from cheating, or something to that effect. Basically pointing out to me how problematic the lyrics are from a feminist perspective. I totally agree and think it’s cool that she had that perspective on a classic way before feminism got cool again. Nonetheless, like everyone else, I’ve always loved the song. For ages I wouldn’t sing it, except at home, but I hope that by slowing it down I’ve brought out the pathos of the woman singing to Jolene. How sad that women are made to feel so competitive with each other, and so helpless in their own relationships. Maybe the difference between being a woman then and being a woman now is that feminism has set us free from so many stereotypes and myths intellectually, but the attack on the self-esteem of women throughout many centuries lingers underneath our skins. Maybe the narrator in 2018 knows that she shouldn’t be playing into the women-as-competitors trope, but just can’t help it.
Good Riddance (Time of your Life) by Greenday 💕
This song takes me right back to sneakily listening to an MP3 player in the school corridors between classes. It was my melancholy song of choice when I was 15, and I still love it ❤️ It reminds me of the band my friends and I were in for one weekend. I was only allowed in because they needed a violin for this one, and I was on about Grade 3 at the time so could just about play the strings solo. Otherwise there wouldn’t really have been a role for me in cool Ramones-inspired the punk/rock band…
(video for this one below)
You Can’t Always Get What You Want by The Rolling Stones
To me this is such a London song, and that’s why I wanted to include it. I love lyrics which references places around town, + I can totally picture the reception + the demonstration of the verses. That lyric connects across the generations between me and The Stones; there’s still a lot of bullshit to protest about. And that chorus lyric- so simple, heartbreaking + optimistic all at the same time 💔 I had a lot of fun stripping this song of the rock and roll band and the choir, + finding the plaintive simplicity in its bones 💁🏻‍♀️

What a Wonderful World by Louis Armstrong

We used to play this in the car when we were little. It reminds me to be grateful for the beauty of the world around us. It’s one of my mum’s favourite songs, and I learned it to sing for the occasional concert I do in Care Homes. I love the string arrangement that Tom Moore has written for it. It’s melancholic and summery at the same time; a combination I really love.

Stay with me by Sam Smith
This is just such a beautiful melody to sing. And the lyrics I think speak about something not many people will admit: sometimes you’d rather be with the wrong person than alone. I like singing it because it gives me a chance to do the pop piano ballad thing, and let rip in my voice a bit. And I’ve played with the gender a little bit 😉
You an listen to The Undercover EP right now, by following this link
Thanks for listening.
Love,
Maz x
p.s. If you’re reading this, and you’d like a physical CD, I’ve got a few left if you follow this link: https://mazoconnor.com/undercover-ep/ PLUS the CD has 2 extra tracks on, ‘Kathy’s Song’ by Simon + Garfunkel, and ‘Don’t Think Twice’ by Bob Dylan. Only available on the CD itself. Enjoyyyyy x
Share: