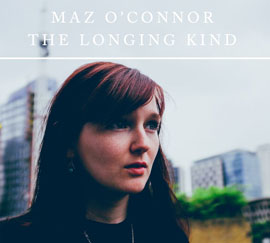 Ordered like a three-act play, the album begins with songs that capture those moments of uncertainty, confusion and displacement that follow being shoved into the world from the comfort of education and family. As well as “trying to use love as a shortcut to home, a shortcut to identity which obviously doesn’t work.”

The songs in the second act are imagined stories based on the subjects of particular paintings (Millais’ Ophelia, Delaroche’s Lady Jane Grey and other immortalised tragic heroines) and how their identities have been fixed by their artists. “I liked the idea of the painting having a voice to say, ‘I could‘ve been so many other things but you had control over me as the artist.’ That’s also true of the songs I write about people in my own life. If I write about someone I’ve controlled the narrative; I’ve fixed them in a song.”

In the final section the record returns to reality, but in responding to the themes of the previous songs there’s a newfound clarity, a redefined sense of self and of arriving home. “I’ve been trying to figure out the difference between mistakes and regrets; to enjoy being young without being stupid.”

The Longing Kind is absolutely a solo album, with Maz accompanying herself on guitar, tenor guitar, electric bouzouki, piano and harmonium. Produced by Jim Moray, the record is released on her own label Restless Head Records.

‘Shadows, Light, and a touch of Joni Mitchell ****’ The Guardian